Well I’m sure, just like me, that was most of your initial expectations. The theory of increased power consumption due to greater processing power just seems so logical. However, after putting both Raspberry models to the test, I was positively surprised by the result! 🙂

In my experiment, I used the Brennenstuhl PM 231E  power meter.

Due to its high accuracy, it provides reliable and comparable measured data.

For those living in the UK, a good alternative would be the Energy Monitor for UK.

And for those in the US, I would recommend one of these: Noname Energy Meter or Energy Meter 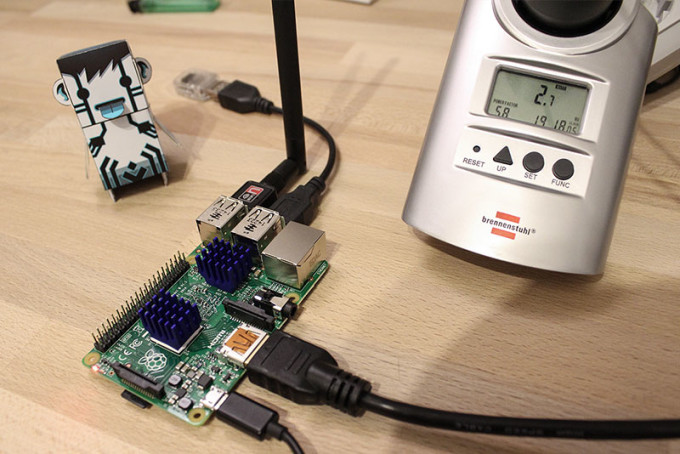 As we know, it is important to keep certain factors the same for fair experimental results.

Both Raspberry models were tested on the following conditions:

So the big question is,

“how much does it cost to run a Raspberry Pi in the long-run?”

I found it particularly interesting to calculate the approximate power costs. Based on the determined values above and an electricity price of €0,28/ kWh, the costs would be as follows:

The Raspberry Pi 2 is not only significantly more powerful, it also consumes lesser power than its predecessor.

It is only in the case of full-load that the Pi2 consumes more power, but therefore it also provides greater processing power.

Especially on Kodi, the efficiency is highly noticeable. On average, you can save 1 Watt with Pi2, which eventuates to a conspicuous difference in annual consumption.

All in all, there is no reason to fear inflated electricity bills even if it’s put in continuous operation. There are other devices which consume more power just by running in standby mode. For example, current Gen. gaming consoles:
Xbox One – consumes 15.3 Watts in standby, and PS4 – consumes 8.6 Watts.

The efficiency of the Pi2 is amazing! I wonder if it’s ever worth turning it off. 😉